It’s the date when BOOKOFF USA INC. was established on.

Our first store in the United States, New York store, opened in April 2000 near Grand Central Station on 41st Street.

That is what we were aiming at the very beginning.

We wanted to deliver the culture of home country to those who are trying various challenges overseas.

The city of New York was hit by great sadness in 2001 and we were also in deep sorrow.

But still we tried making a place where people could get relaxed and find good aspects of life.

Gradually we nurtured and built a good relationship with customers who come to the store.

Then, our challenge was taking in California, we launched a store in Los Angeles in 2001.

Since then California became our major state to open BOOKOFF stores.

At first, our major customers were Japanese people, but naturally the number of English-native customers increased.

And these local customers brought us more and more English books, CDs, DVDs and Video games.

The English books and other items in the store shelves were what we had prepared over 9 years.

The grand opening was on Black Friday at 5 AM.

I still clearly remember the scenes from the opening day; first customers lined up in the early morning, the managers and staff were happy to welcome customers, customers were very excited and filling their baskets with lots of items.

Now we have 10 stores in the United States.

The items sold by our customers in each area make our stores rich and diverse.

Currently, there are 5 stores with Japanese and English products, and 5 stores with English-only. (By the way, Gardena store has the largest number of Japanese products, so it may be the closest to the very first store we opened in US.)

Our used items have also expanded not only books but CDs, DVDs, video games, figures and electronic devices. (There were various trials and errors;).

It past 20 years but our challenge never stops!!

(History of BOOKOFF USA INC. in the United States)

“Hawaii Pearlridge Store” (Closed/relocated in October of the same year)

Nice to see you here! We are BOOKOFF USA.

Some of you have heard our name, have ever visited our stores, or some are new to us, welcome everyone!!

We are glad to see you here.

We will introduce ourselves in this blog several times for you to know us.

Where did we come from?

Yes, we are a company from Japan.

Dating back in 1990, the first BOOKOFF store opened.

Located in residential area of ​​the bed-town city, that’s where our story began.

It was a small “second-hand bookstore”.

But it was quite different from other second-hand bookstores at that time.

The image of secondhand bookstore in Japan until then was dark, dirty and dusty, where only hardcore type of book lovers visits, and the threshold of buyback was high. So, it was not a friendly place to everyone.

Therefore, the founder created a new concept of secondhand bookstore and applied to the first BOOKOFF; beautiful, bright and clean place. It’s just like a regular retail store. It seems easy for everyone to enter. No hesitation for customer to bring in their books.

It was also distinctive that the books weren’t sealed or packed, so that customers could easily check the contents and choose their favorite books.

※This is not particularly special  in here USA, but in Japan usually 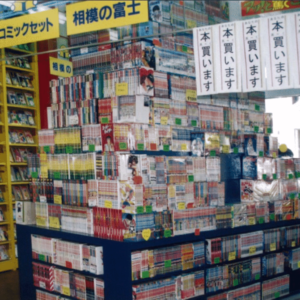 At the book stores, brand-new books, especially Mangas, are in sealed in plastic bags. Also, even in the second-hand bookstore at the time, books were in plastic bags. If you want to see the contents, you must ask store staff to open it.

(How we can decide to buy or not without knowing its content?)

Meanwhile, BOOKOFF just put cleanly-processed Mangas and novels on shelves as they were. You could reach as many books as you wanted. Encounter with books became unlimited.  For the children, it was a paradise of books.

And not only children but also adults began choosing their favorite books with fun.

About the buyback service, BOOKOFF also changed the approach.

Most of the secondhand bookstore at that time used the word “We buy your books”, but BOOKOFF used “Please sell us your books”.

This word which puts more importance to our customers who bring in their precious items is still used in all the BOOKOFF stores.

(Oh, By the way, this word was an invention of a part-time staff of the first store.

This lady, later, she became the chairman of BOOKOFF.)

The concept of new-type secondhand bookstore was well accepted and began to expand dramatically and now there are over 800 stores in Japan. 97% of Japanese people recognize what BOOKOFF is.

Merchandise handled in Japan now are not only Books but also CDs, DVDs, Video games, figures, apparel, sporting goods, accessories and watches. (You may be surprised because our US stores are based on mostly books.)

After the big growth in Japan, BOOOKOFF had a new ambition, “We want to deliver Japanese books to Japanese in overseas”

In 2000, finally, the challenge of BOOKOFF started in New York, USA began.

by A.Yonemoto (=米本, in Japanese, these syombols mean “America and Book”. Is it a coincidence?)

Back to top
We use cookies to ensure that we give you the best experience on our website. If you continue to use this site we will assume that you are happy with it.Ok